Hollywood has all but given up on ringing in 2022. COVID’s highly transmissible Omicron variant, which has ripped through the country at a shockingly fast rate, has prompted a wave of New Year’s Eve entertainment cancellations. Fox scrapped its “New Year’s Eve Toast & Roast,” and Phish rescheduled their “New Year’s Run” concerts. Still, the annual mainstay event for the past five decades will endure: “Dick Clark’s New Year’s Rockin’ Eve,” hosted by master-of-ceremonies veteran Ryan Seacrest and Forbes ’30 Under 30′ alum Liza Koshy.

The ABC special is well-seasoned, with 50 years of experience hyping up the nation until the ball drops at midnight. But how will the network pull a multi-city spectacle with an immense cast of co-hosts, musicians and performers, as well as a production crew, in the midst of a COVID surge? Seacrest and Koshy spoke with Variety to discuss their game plan, which involves following pandemic protocols and “rolling with the punches.”

Added Seacrest, “We’ve got Karol G live, we’ve got Daddy Yankee live in Puerto Rico, and we’ve got three different countdowns across different time zones. And we’ve got about a quarter of the people that would normally come into Times Square coming to see the show, so there will be a lot more action this year than last year.”

Notably absent from this year’s festivities is LL Cool J, who announced yesterday that he had tested positive with COVID and would no longer be able to take the stage on Dec. 31. Seacrest stated that everyone has been “kept at the correct distance,” and that all involved with the massive endeavor have been tested and re-tested again.

“He’s got to do what he needs to do, and we are wishing him the best,” Seacrest said. “Over the years there have always been challenges, whether it be a performer who says two hours before we’re going live that they aren’t sure if they can perform, or whether it is a performer that comes back and does the show twice in a row, you just never really know what is going to happen.”

Regarding the COVID safety measures “New Year’s Rockin’ Eve” has taken, Koshy joked that she was “more than happy” to get a test “up her nostril daily” if it meant ensuring “good health and happiness,” which is at the forefront of her mind this new year.

“We have talent on and off-camera, and the entire crew and their families are taking all of these health and safety protocols very seriously,” Koshy tells Variety. “We have been in our own little bubbles and rooms, and we’ll come together Friday night to start the new year off right.” 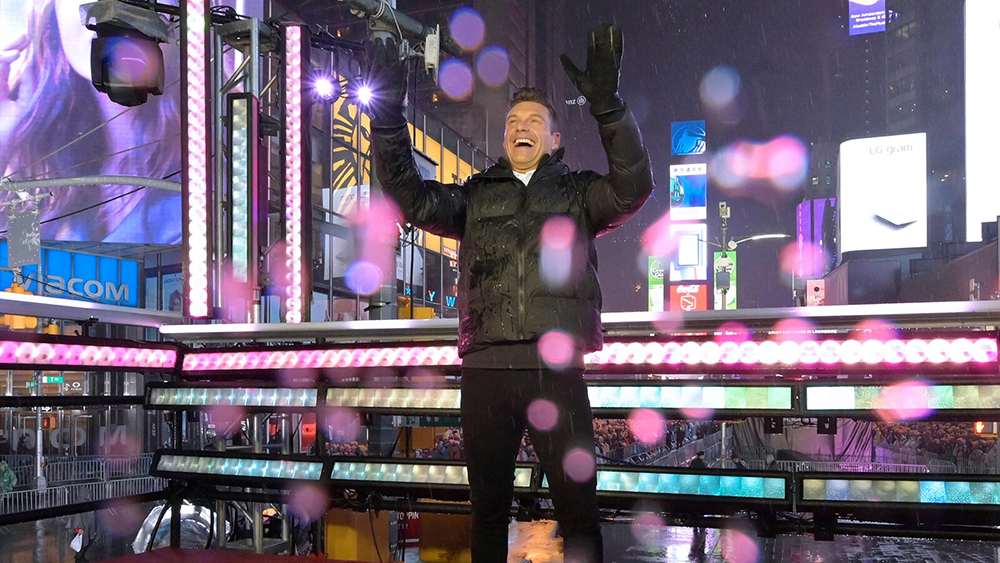 Along with LL Cool J, Beyoncé protégé and singer Chloe Bailey (known as Chlöe) — who was also scheduled to perform at “New Year’s Rockin’ Eve” — has dropped out of the program for unknown reasons. Per Seacrest and Koshy, different divisions of the show have been compartmentalized to mitigate viral transmission, noting that the cast and crew is in different “trailers and pods” all over New York City. These types of protocols have been similarly implemented in the special’s other live locations, such as the Billy Porter-led party in New Orleans and the Ciara-led event in Los Angeles. “There will be things that happen or go wrong between now and the end of the show,” Seacrest said, “and that’s just what we signed up for.”

While it is Koshy’s first time hosting the show, and she is hoping to “embody the energy and electricity of the ball on New Year’s night,” Seacrest is all-too-familiar with the unpredictability and antics that come with putting on a live show of this magnitude and viewership scale. Seacrest has hosted the New Year’s gig for the past 17 years, and he is excited to look back and pay homage to the show’s past during its 50th Anniversary iteration.

“We’re gonna run back some footage over the last 50 years, and you’ll see when Clark started and the Village People performing in 1979 and think, ‘Wow, this is really an iconic franchise,’” Seacrest said. “Dick’s vision was to always celebrate the turning of the page and to bring that enthusiasm and all of that action into your living room, where you were wearing your slippers and hanging out in your pajamas or sweats, but could still feel like you were a part of it. I think that’s what we try and maintain with each year that goes by.”

Seacrest added that especially this year, as thousands of flights are canceled daily due to COVID-related staff shortages, derailing holiday plans, the pressure to deliver the best possible show is elevated for the 2021-to-2022 transition.

“They may not be paying attention to what we’re saying and what we’re doing, and they may just have the TV on in the background, but that’s part of what this show is. That’s something that I always sort of think about — how exciting it is to be there and to feel that magical moment when you say ‘Happy New Year’ to America at the end of the countdown,” Seacrest said.